The folks at Windward have been doing great work at living sustainably for many years now.  Part of that is not growing too fast.  Unfortunately for the rest of us, that means that they are not getting the word out on what they are doing as much as the could.  Their website is a treasure trove of information useful for Sustaining Universal Needs, so I thought I should feature some here.

an old method of no-till agriculture 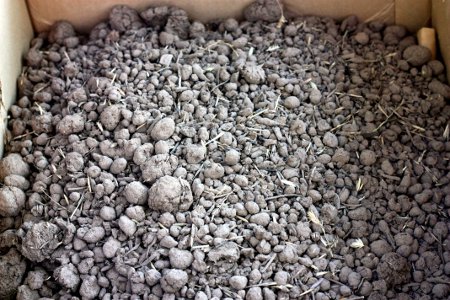 Seeds balls are an ancient technique for propagating plants from seeds without having to open up the soil with digging tools or a plow.

The rediscovery and popularization of seedballs in the modern age is typically ascribed to Japanese natural farmer and philosopher Masanobu Fukuoka.

Fukuoka first recognized seedballs (or clay balls as he referred to them) as a means to make use of agricultural areas that otherwise could not be tilled.

He eventually began experimenting with seedballs and a handful of other techniques to eliminate tillage all together even from land that could be easily tilled. He believed, as with many natural farmers, that tillage over large areas is laborious, destructive to soil health, and ultimately not needed and thus a waste of time and energy. 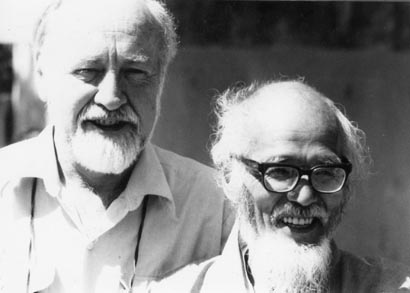 After many years of experiment and observation, he developed a method of growing rice, vegetables and fruit over large acreages without ever opening up the soil. He called he method Natural Farming, or “Do Nothing” farming, and wrote several inspiring and informative books on the matter. The One-Straw Revolution

, and Sowing Seeds in the Desert

being two of the most renowned.

The architecture of seedballs is pretty basic: seeds are combined with clay (preferably red volcanic clays) and organic material like compost, worm casting or well-decomposed manure. Also, a portion of fibers such as paper mash, finely cut straw, cotton or wool can be added to give the seedballs greater tensile strength.

The mixture is moistened and formed into compact lumps or balls, allowed to dry, and then cast out into fields at the appropriate time of year depending on the seed mixture.

Why are seedballs so great?

With knowledge, skill, and patience, seedballs can be as effective a way to establish plants as plow-seeding or drilling, AND they can be made by anyone anywhere in the world that has access to clay, soil, and a seed source, for no money, and with almost no energy and much faster than drilling or tilling. 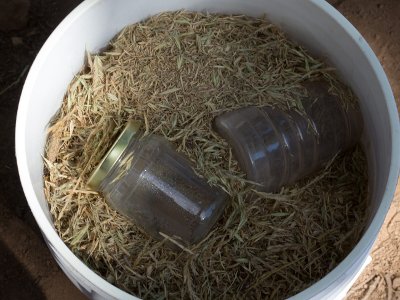 hand harvested seed mix of over a dozen species of perennial grass, plus forbs and legumes

The complexity of seed species, guilds and companion plantings is almost endless. One could even compose seed balls that contain all the seeds for a mature ecosystem, and all the seeds needed to establish the pioneers and mid-succession plants needed to bring a degraded landscape into a climax ecosystem.

Seedballs can also be used to “over seed” existing ecosystems, without damaging the soil structure. Or to seed productive plants into forested areas and steep hillsides where tillage is not possible.

Seed balls are effective on small scale (such as in a single garden bed) or on the scale of thousands of acres, and by a single person as fast as someone can broadcast them.

As some of you may know, for the last several years I have been establishing perennial pasture in several areas of Windward’s property.

At this point, I have not been able to find many resources as to how to effectively seed pasture in the kind of sloped, forested conditions I most often am working in. So I’ve had to pioneer something that works for us.

All of the methods I have used thus far have not turned out particularly well. Though, I have had moderate success in some areas. In the process I have learned quite a lot about what is, and is not, possible in our climate and conditions.

I take assurance from Fukuoka’s example. It took him around 15 years to figure out something that worked on his land. Along the way he experienced many total crop failures.

I found a few videos of Fukuoka teaching people how to make seed balls, and it was obvious that what he was doing was different that other people. While the following video is not in English, nor subtitled, you can see the process he uses pretty clearly.

When Fukuoka started seeding hundreds of acres of desertified land at a time, he began utilizing a small cement mixer to churn out seedballs. You can see some of this in the above video. There may come a point where I turn to that level of technology. But I reckon it is better to work with my hands in the materials as I discover what this process has to teach me.

Making seedballs is relatively simple, but like any craft it takes some time to get the hang of it.

You combine all the dry ingredients (clay, compost, and seed) together in a large flat tray. Making sure that the clay has been pounded and sifted so as not to have large chunks in it. 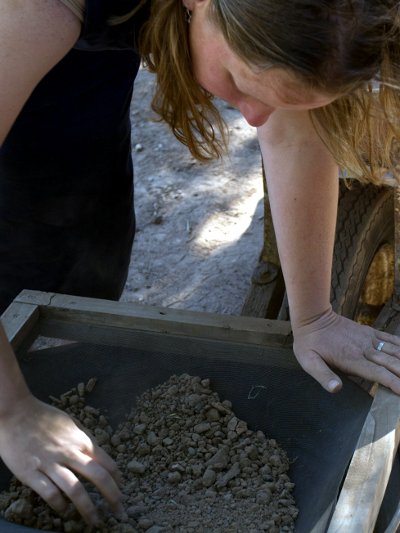 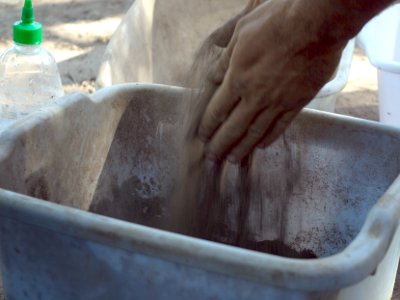 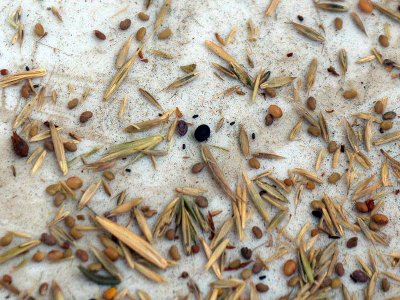 The ratio of dry parts (in volume) I have been using is taken from Fuokuka’s suggestion.

You then add a few squirts of water to the mix, and rotate the tray in a circular motion. The goal is to start coating seeds with water, so the clay/compost sticks to them. Just like making a snow ball. 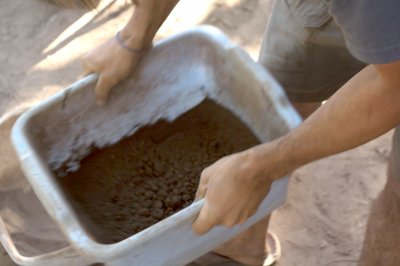 Rolling the balls around in a circle

Keep adding small amounts of water to coat the balls as they form, so that the remaining soil can stick to the outside. 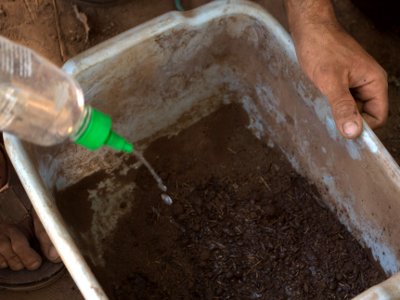 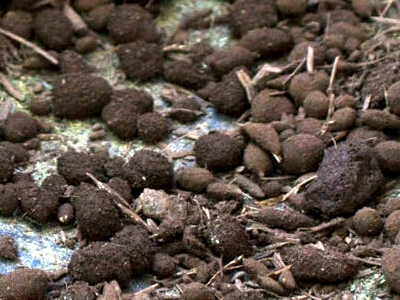 In the end you get randomly shaped, dumpling like balls.

Since we are using large, oblong grass seeds, the balls are not always that spherical. And, we don’t always get every seed inside of a seed ball.

If you are not making the seedballs to be thrown out immediately, it is important to start dryinmg them straight away. I usually make the balls on a sunny afternoon to ensure they have enough sunlight to dry that day. Otherwise, many of the quickly germinating seeds will sprout and die before they are cast.

They’ll be more to come as I work with this technique more throughout the coming season.