Off the keyboard of William Hunter Duncan

Published Originally @ Off The Grid in Minneapolis 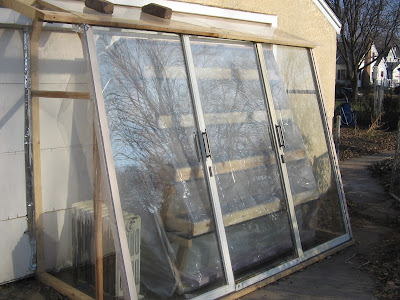 Three scrap sliding glass doors, recycled lumber and some acrylic glass I found in a dumpster. The rack is covered with 3 and 4mil poly sheeting, a greenhouse within a greenhouse. 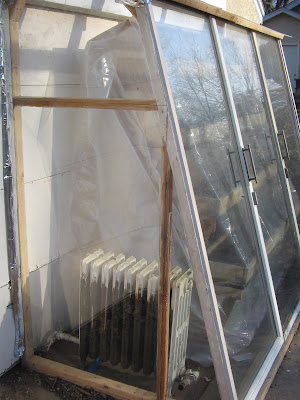 This old radiator I inherited from the blogger @ Eighth Acre Farm. The idea is, one more thing to collect solar energy. The effect is probably not negligible, but probably not that effective. It should be facing the other way, the long side facing the sun, but there isn’t room. 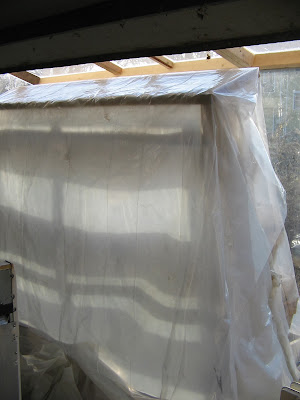 The view from inside the garage. I had been pulling the rack inside every evening, as it has wheels. But the garage tends to be like an icebox, and it occurred to me, perhaps the concrete of the driveway is radiating heat somewhat during the night. I’ve been leaving the rack outside now in the greenhouse, just opening it up to add water, every third day. 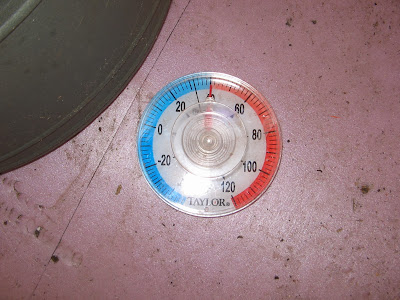 The temperature at floor level inside the rack seems to stay around 40 degrees, no matter what, cooling somewhat in the evening when it is exceptionally cold outside: 3F the lowest outside this year. The bottom of the rack is covered with a sheet of 1 1/2in, rigid pink insulation. 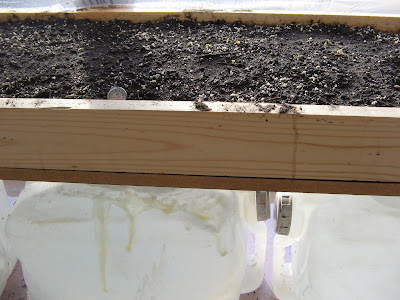 The lowest of the four racks. Below are four bulk cooking oil, plastic containers, filled with water. They should be painted black (but I keep forgetting to buy black paint.) Otherwise, solar energy seems to pass through without heating the water much. Though, it seemed to me that of the four racks, this lowest one sprouted second, though now there does not seem to be much difference between the lower three racks, in terms of growth. In fact the plants in this lowest rack appear more yellow now than those of the upper three racks. 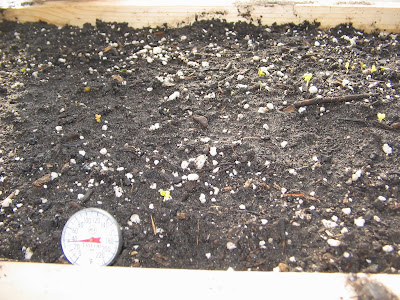 Early sprouts. I have seen the soil temp on days when there is sun all day, @ 60F. Lately though we have seen much sun in the morning, overcast most of the afternoon when the sun is strongest. Even on cloudy days when the temp outside is in the 20′s, I have seen the soil temp @ 50F. Here it is actually lower than the air temp at the bottom of the plant rack, about 38F, @ 11am on a sunny morning after three or four days of sun in the morning, cloudy the rest of the day. 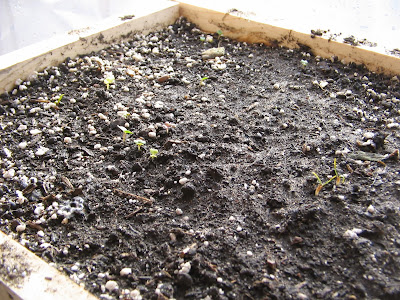 The racks are about 10in wide, 70in long and 3.5in deep. I filled each with 3in of potting mix, scattered spinach, lettuce and lambs quarter seed, about 30 different varieties, and then applied 1/2 inch of homegrown compost. Here are several different kinds of plants sprouting, on the second level. Spinach, lettuce and lambs quarter appreciate cool temps. 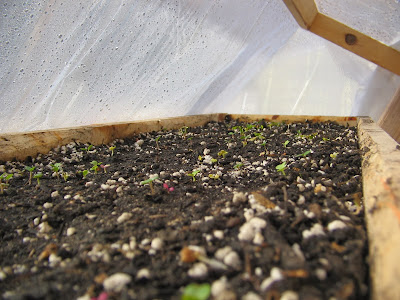 The real magic seems to be on the top rack, about twice the growth, about twice as fast, the plants appearing much healthier. Heat rising, of course. I imagine the soil temp here is more moderate, and warmer generally. 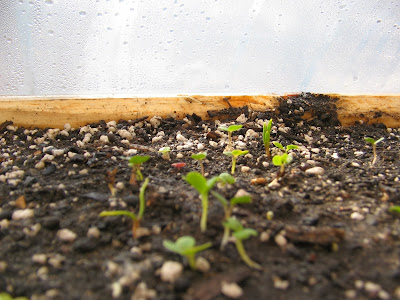 I planted, the second weekend in November. Three weeks of growth, slower than it would be, planting outside in the spring, but not by much, at least not here @ the top level. We are still three weeks away from Solstice, when the sun is lowest in the sky, so growth is not going to speed up. After Solstice, there might be a gradual increase in sunlight, but temperatures outside on average will be less than they are now, for the following two months, January and December.  In March the greenhouse will be for starting the spring and summer vegetables.

While I have heated this greenhouse using nothing but solar power, my intention is to insulate the garage, and build a rocket stove, pulling the racks inside over-night. Burning small amounts of wood, I hope to moderate overnight temperatures around the rack, to moderate temps inside it. At present, because the racks are shallow, soil temperature fluctuates too radically 60-38F, considerably more than it would in the garden in the spring. Heating the garage even slightly, overnight, would help maintain soil temp generated by the sun, putting less stress on the plants, making consistent growth more likely.

Otherwise, I am happy with the progress. It would have been better to start a month earlier, at the beginning of October, so the plants would not be at such a tender stage when the temperature dropped outside consistently below freezing. Still, I’m hopeful that I will have some edibles by the Solstice, with slow growth throughout the winter.