Our paper published in the “Journal of Cleaner Production” where we discuss the possibility of using renewable electric energy to power all the phases of the agricultural process. For a copy of this paper, send a message to ugo.bardi(whirlywhirl)unifi.it.

You know that when energy in agriculture is discussed, the paradigm is energy production in the form of biofuels. But the idea of biofuels manufactured from agricultural products is monumentally wrong. Modern food production depends nearly completely on fossil fuels: agriculture is a consumer of energy, not a producer.

The problem is that gradual depletion is making fossil fuels more and more expensive. And higher prices of fuels immediately generate higher food prices.  It has been happening and it is a big problem especially for the poor people of the world (graph below from FAO data) 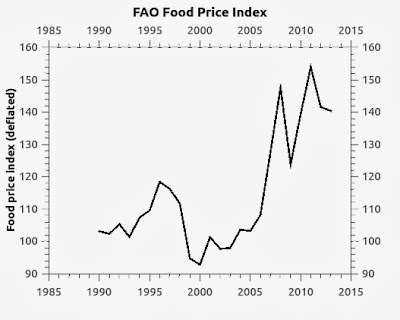 So, how are we going to do? We need energy for agriculture, there is no doubt about that. To obtain this energy we could go back to human work and pack animals, as in the past. It is the concept of the “50 million farmers” (in the US alone) proposed by Richard Heinberg. But the work of the farmer of old was anything but pleasant and not even very efficient. Pre-industrial agriculture produced only a modest surplus at the expense of the suffering of a large number of people. There is no doubt that the coming of modern, mechanized agriculture was seen everywhere as a great advance in freeing people from the slavery of the heavy manual work of farming. (Image below (1971) courtesy of Stefan Landsberger) 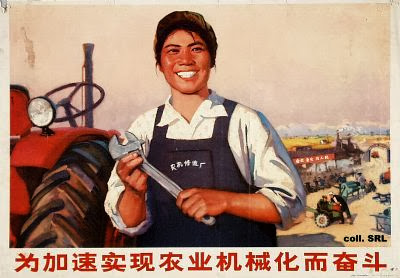 So, can we eliminate fossil fuels in agriculture without having to go back to the back-breaking practices of the past? Myself and some colleagues started asking this question already some years ago and that led us to study the idea of using renewable energy (NOT intended as biofuels) to power agricultural machinery. We noted that modern renewable technologies (mainly wind and solar) produce electricity as output and that transforming electric power into fuels is expensive and inefficient. So, the idea we developed was to use directly electricity to power agriculture.

The result was the “Ramses project” that led us to develop a prototype agricultural vehicle that wasn’t just a tractor, but a multipurpose vehicle for a variety of tasks, including energy storage (in the foto below, from left to right, Toufic El Asmar, Paolo Pasquini, and Ugo Bardi). 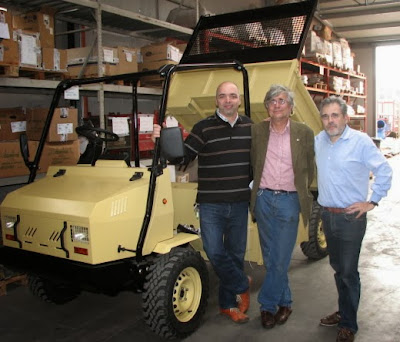 The Ramses vehicle was a success as a prototype, and it has been used in various farm activity for a few years, first in Lebanon and now in Italy. It taught us several things; one is that, making the appropriate calculations, today, electric mechanization in agriculture is still marginally more expensive than conventional, fossil fuel based, engines. Because of this marginally higher costs, farmers still use conventional engines and the Ramses is still just a prototype.

But things are gradually changing and, eventually, because of both depletion oan climate change, we will have to “wean” agriculture away from fossil fuels. This idea led us to a more comprehensive examination of the agricultural process. If the Ramses demonstrated that we can use electric power for many tasks that require mechanical energy, it is also true that agriculture needs much more: it needs fertilizers, pesticides, transportation, refrigeration, and more. Can we perform all those tasks using the electric energy produced by renewable sources?

That is what our recent paper on the “Journal of Cleaner Production” discusses (authors U. Bardi. T. El Asmar and A. Lavacchi, vol. 19, pp. 2034-2048 – 203). It is an extended examination on how energy is used in agriculture and how, in the future, we could obtain this energy from renewable sources, moving away from fossil fuels while at the same time maintaining the high productivity of modern agriculture.

The results? As you can imagine, it will not be an easy task; but it is not an impossible one, either. As modern renewables (wind and solar) increase in efficiency and come at lower costs, it is perfectly possible to think of integrating them with the agricultural process, first reducing and then fully eliminating the need of locally using fossil fuels.

Then, of course, agricultural production is not just based on the local use of fossil fuels: fertilizers, for instance, are produced on large industrial plants. These plants can be powered by renewable energy and it turns out that, for instance, there exist known methods for using electricity to generate ammonia as fertilizer without the need of using methane or hydrogen as feedstock. Even so, even abundant energy can’t solve all problems, for instance the gradual depletion of mineral phosphate resources. For that, only the careful management of what we have can maintain the availability of the necessary phosphate based fertilizers

So, the end result of our study is that modern renewable energy can be a tremendous help to agriculture, but not for the wasteful and unsustainable agriculture of today. It is possible to turn electricity into food and we don’t need to go back to the back-breaking practices of old. But we need to imagine and build an agriculture that doesn’t destroy the resources it uses.